Some of our hard working volunteers at the Yamba Triathalon 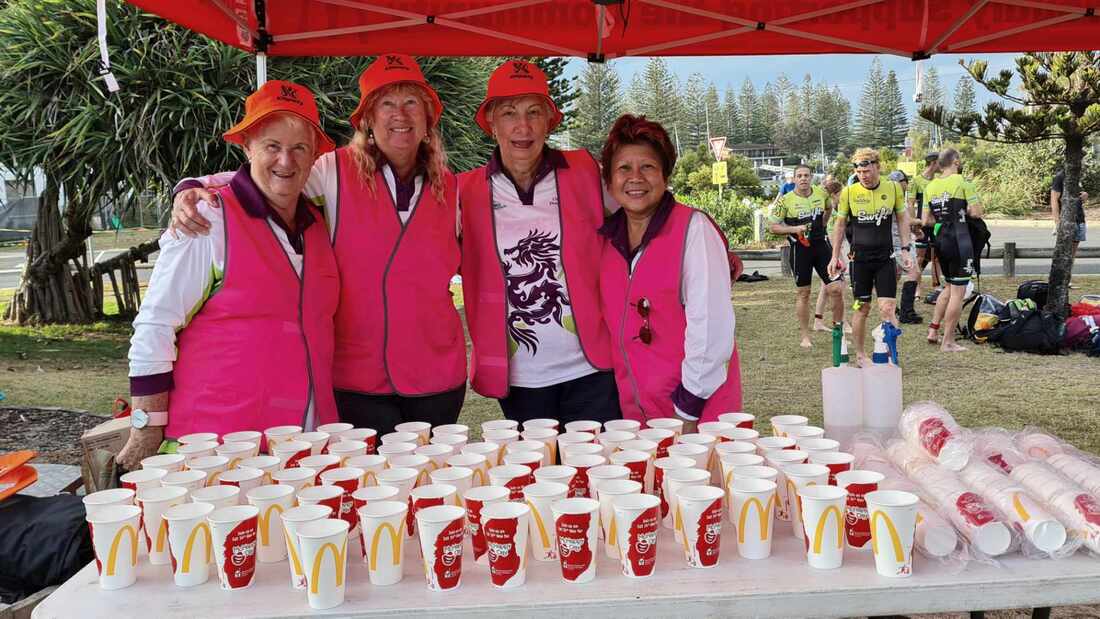 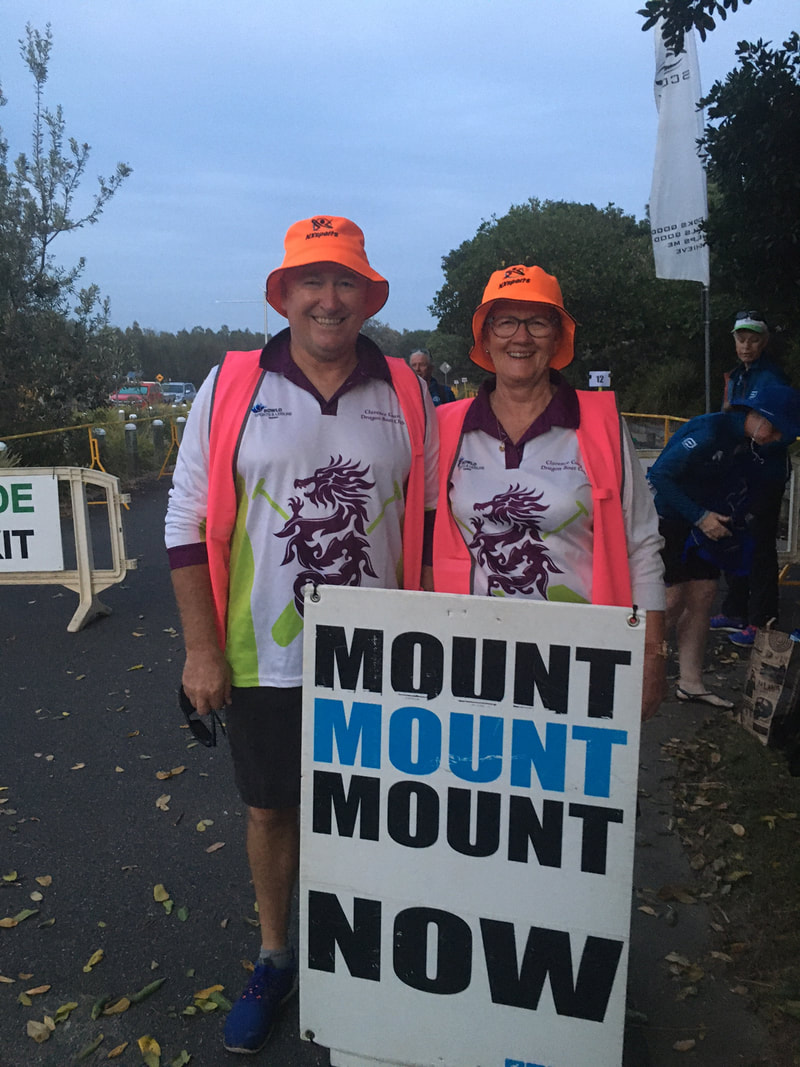 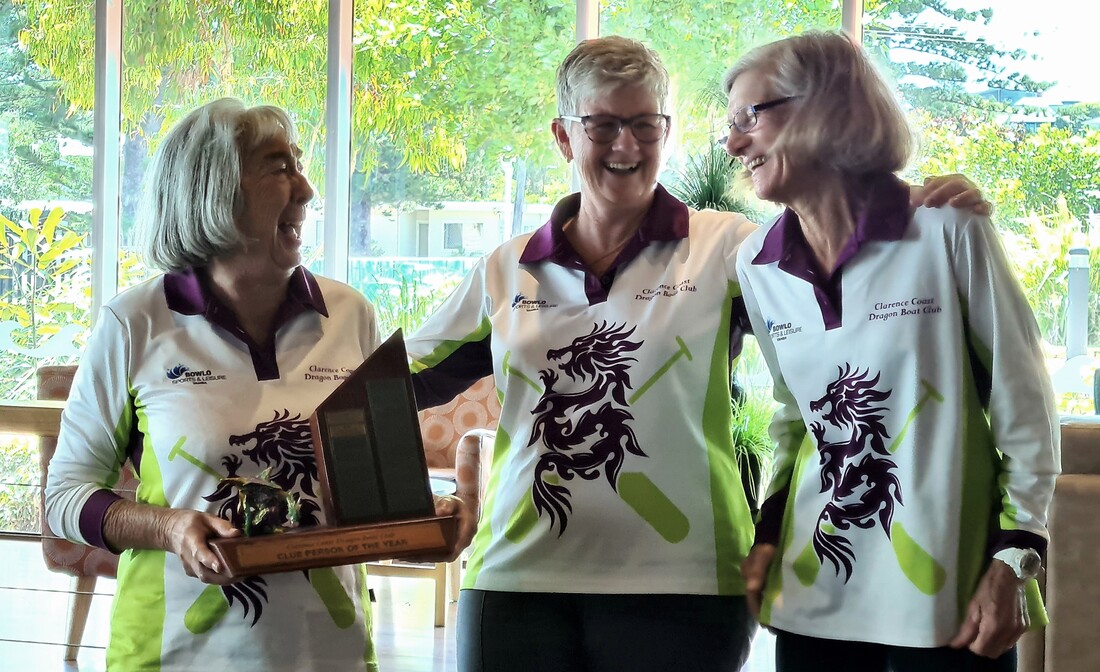 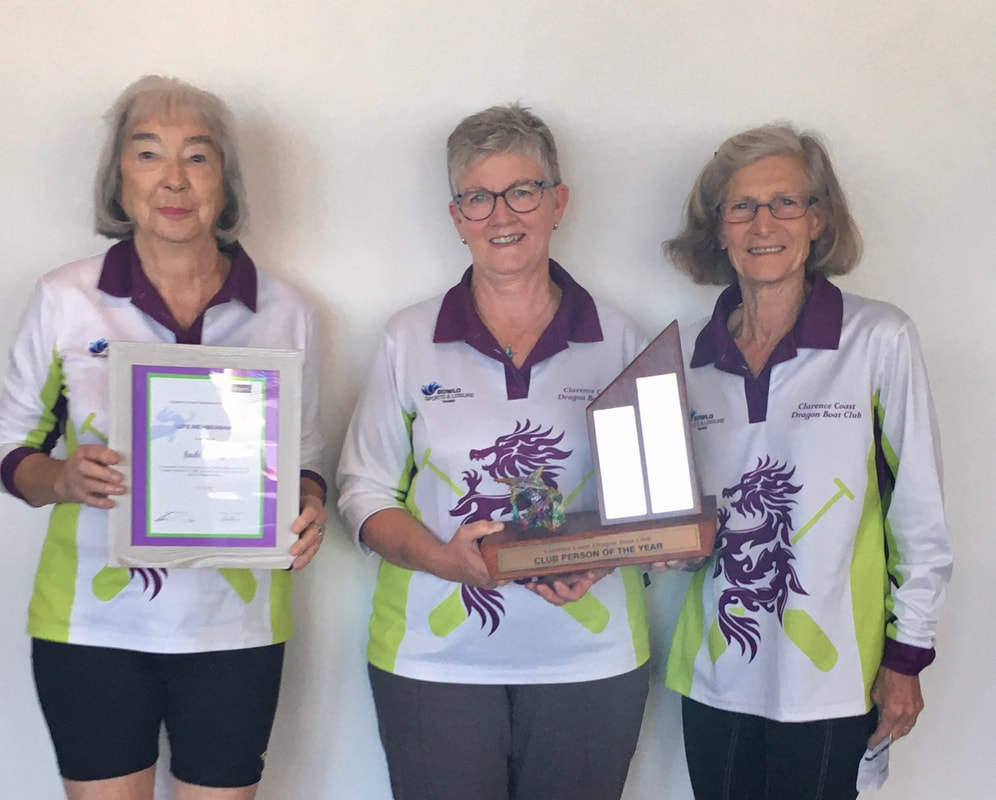 We joined forces with Grafton Dragon Boat Club to enjoy a fabulous Australia Day paddle on the mighty Clarence River at Brushgrove. Following an hour of social paddling the South Arm, we headed to the Brushgrove Pub for a delicious breakfast followed by a quiz to test our Aussie knowledge, best dressed awards and a thong throwing competition.

Once again our club participated in a social paddle to demonstrate our support for Liptember.
​Kim rocked the lippy & pout from the drummer's perch, Brendan looked as though he was channelling the 'Joker' and prizes were awarded to Mary Jane, Kathy and Maureen for the best display of lippy.
Liptember is a campaign dedicated to raising awareness for women's mental health.

Over the course of 21-days, 21 members of Clarence Coast Dragon Boat Club were challenged to complete 3,128 push-ups in total, representing the number of lives lost in Australia due to mental health issues in 2017. We joined 50 000 across Australia and even Antarctica completing the July Challenge.

Forty paddlers from Clarence Coast, Grafton and Titivators (Urunga) Dragon Boat clubs left the shore of Grafton Rowing Club and paddled 10 kms around Susan Island returning to the Rowing Club. A good stretch, a few changeover of paddlers and a sugar fix of snakes to nibble on and we headed out again to do another 10kms around Elizabeth Island. Whilst on the water we were passed by many rowers from Grafton, Iluka and Lower Clarence Rowing Clubs, also completing the challenge.

​As coffee was sipped during breakfast at the Brushgrove  Pub, the award winners were announced for the FIFA Women’s World Cup competition – The Golden Boot, The Best Goal Golden Glove and Best Player received their trophies.

As both boats drew alongside each other on the river, the Ode was solemnly read and members placed a sprig of rosemary into the waters and paddlers reflected on how lucky we are to live and have family in both Australia and New Zealand.  Following a surreal paddle, watched closely by a territorial circling hawk, we returned for a breakfast feast of bacon and egg rolls, fresh fruit and juice. The morning was completed with the traditional rowdy game of 2-UP with the river and a magnificent fig tree as the backdrop. A special thank you to Andy and Vicki at 'The Farm' for their hospitality!

On 13th April 2019 we celebrated our 9th Birthday with a "C" theme -  colour, character or accessory...we had Lisa Minnelli from Cabaret, a very colourful paddler, Cat Woman, Council Worker, Cowgirl, Christmas Tree, Cleopatra and Captain from Gilligan's Island and a Colour Consultant Chart and many more.

After launching from Witonga Boat Ramp, in near perfect conditions – outgoing tide and East South East winds, CCDBC paddlers returned to shore and enjoyed the bi-monthly sausage sizzle.  We also dug deep into the compliment box and withdrew a compliment and with each compliment read you could see a smile spread across the persons face. 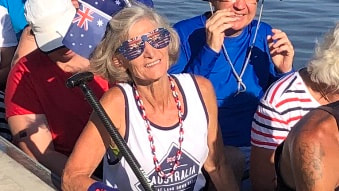 Thank you to Santa (Wayne) and his helper (Chez) for hosting us the best Christmas Party ever.....good friends, good food, lots of fun and laughter!!!

​From November 1 Clarence Coast Dragon Boat Club men have been quietly committed to 30 hairy days and nights growing moustaches and beards in support of Movember to raise awareness for men’s mental health, prostate cancer and testicular cancer research. But, beside every great Mo Bro is an equally amazing Mo Sista, acting as a driving force for men’s health awareness and providing invaluable encouragement for the moustache.

​The concept of Loud Shirt Day is simple: Get LOUD for children with hearing loss; and let everyone know that it is possible for a child who is deaf or hard of hearing to learn to listen and speak with early intervention! AND Clarence Coast Dragon Boat Club did it with PIZZAZZ!

Our members purchased a Liptember lipstick from participating retailers.​ Funds raised during the month of September are donated to the Centre of Women’s Mental Health, Lifeline, Batyr, RUOK?, The Jean Hailes Foundation and The Pretty Foundation.

​August saw members dig deep into their wardrobes to find and wear a flannelette shirt to the paddling session to support Flannie Day Food Drive.
Paddlers donated non-perishable food to raise awareness about homelessness and provide practical support for the hungry in our community.

Paddlers have been immersed in football. From being allocated one of 32 teams to follow, During warm ups they greeted each other in the language of their country, they tried very hard to pronounce their player’s names (some with 25 letters) and then provided some scandalous facts about their teams. The Icelandic Clap was certainly one to get the heart rate up!
Two mornings we paddled in traditional dress to the delights of other boats on the Clarence River.